Friedrich Prince of Solms-Baruth fights for restoration of estate 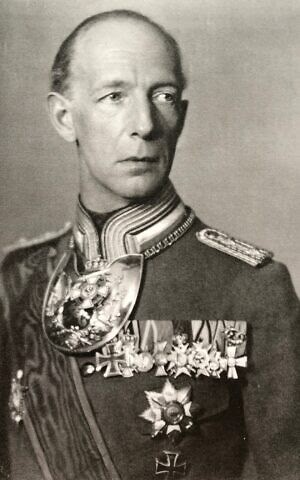 ICYMI:   The late Friedrich Prince of Solms-Baruth (1886-1951) was involved in the "July Plot" to kill Adolf Hitler and take down the Nazi regime.  After the failure of Operation Valkyrie, the prince was arrested and tortured for his role in the failed coup attempt.  He was imprisoned and his property and assets were seized by the Nazis.   His descendants have spent 30 years trying to regain the family properties. The Times of Israel offers an excellent account of the evidence that proves the late prince was forced to turn over his properties to the Nazis although the German government has claimed that he did this voluntarily. Friedrich's grandson, Friedrich, Prince of Solms-Baruth, has taken a major role in the next step to regain his family's properties, which includes Schloss Baruth in Brandenburg. "It is iniquitous that my family's property remains sequestered by the German state who prefer to uphold torture, murder, and theft by a regime widely accepted as the most evil and corrupt in modern history,"  the prince told the Times. Friedrich is the elder of two sons of the late Friedrich, Price of Solms-Baruth (1926-2006) and Baroness Birgitta  von Berchem-Königsfeld.  The 58-year-old Prince is unmarried and divides his time between homes in South Africa and France.  His younger brother  Count Julian is the heir presumptive to the title. He is married and has two children, Count Alfonso and Countess Cosima. His grandfather, Prince Friedrich married Princess Adelheid of Schleswig-Holstein in Potsdam on August 1, 1914.   Adelheid (1889-1964) was the fourth of six children of Friedrich Friedrich, Duke of Schleswig-Holstein-Sonderburg-Glücksburg and Princess Karoline Mathilde of Schleswig-Holstein-Sonderburg-Augustenburg, a maternal granddaughter of Princess Feodora of Leiningen, Queen Victoria's older half-sister.   Adelheid's four sisters all married well.  The eldest, Viktoria Adelheid married Carl Eduard, Duke of Albany and Duke of Saxe-Coburg and Gotha, a British prince by birth and a grandson of Queen Victoria.  Alexandra Viktoria married her first cousin, Prince August Wilhelm of Prussia, the fourth son of Kaiser Wilhelm II, who was a grandson of Queen Victoria.   Helena was the wife of Prince Harald of Denmark, the fourth child of King Frederik VIII and Queen Luise. The youngest of Adelheid's sisters, Karoline Mathilde, married Count Hans of Solms-Baruth, who was the younger brother of Adelheid's husband, Friedrich,   Adelheid's only brother, Duke Wilhelm, married his second cousin, Princess Marie Melita of Hohenlohe-Langenburg, a great granddaughter of Queen Victoria and her half-sister, Feodora who had married Ernst I, Prince of Hohenlohe-Langenburg. After the second world war, Prince Friedrich and his family emigrated to what was then known as South West Africa (now Namibia).  He died in Windhoek in 1951. https://www.timesofisrael.com/german-prince-fights-for-estate-stolen-after-his-grandfather-tried-to-kill-hitler/
http://dlvr.it/SFWk9T
Posted by admin at 22:53