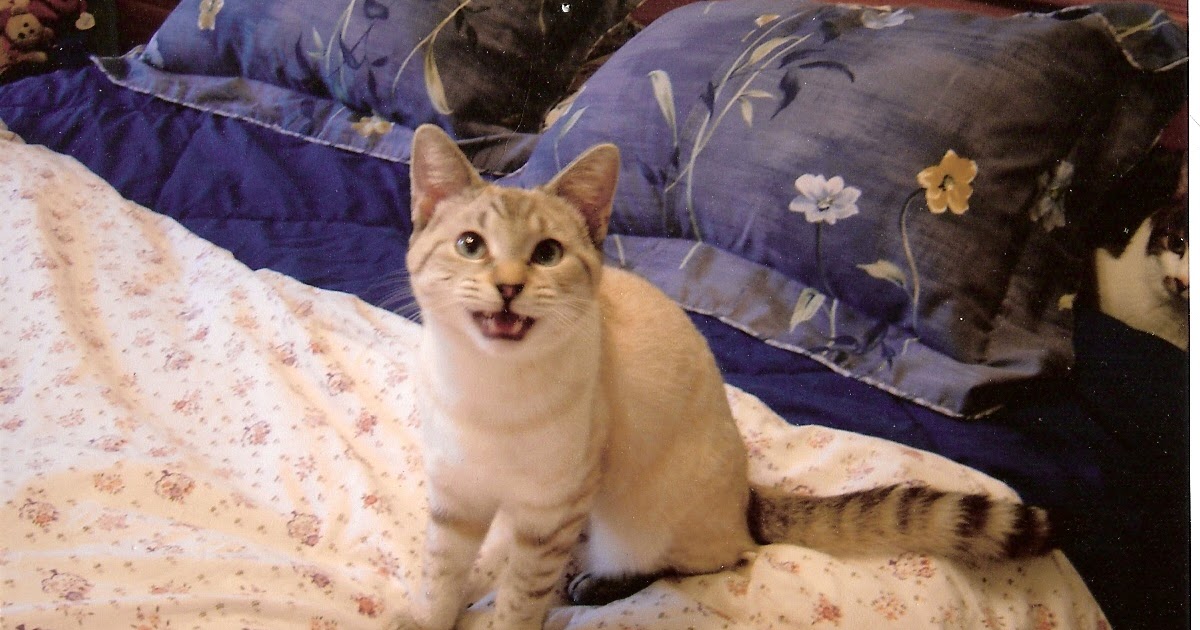 The cream-colored Sienna before the stripes took over  Shortly after 9:00 a.m., this morning Sienna Rose Koenig died peacefully in her mother's arms.  She was 16 years old and much loved. Sienna was born on June 19, 2005.  Three months later she and her twin brother were found by a local rescue group and placed with a foster family.   In early December, the kittens, along with other felines, were a part of an adoption show at Petsmart in Springfield, Virginia.   Sienna was not afraid to show love Sienna and her big brother, Edison Sienna loved the Nats as much as mommy and Harper Sienna was a monarchist, of course, but if she could vote, she would vote Democat a kiss for Edison Let's be honest, she chose her furrever mommy ... me.   There I was in Petsmart, with a shopping cart filled with food. I had three cats at that time:  Buddy, Edison, and Ella.  There were no plans to adopt another cat.   As I walked past the cages with the kittens and cats,  I felt a tap on my arm.  A cream-colored kitten was giving me a love pat.   Hey, look at me.  I looked.   You are so cute,  you have blue eyes. I have never had a blue-eyed cat.  She was cream-colored with few stripes.   Pure joy for Sienna being able to snuggle with Edison Edison and Sienna thought it was fun to play in the tub without water of course I asked to hold the kitten.  I held her for a few minutes.  Purring.  Those blue eyes.  The next words out of my mouth were: where is the paper to fill out for adoption?  The approval took a few days as the rescue group called my vet, who reassured them that, yes, I am a great cat mommy. Sienna was a Lynx Point Siamese, which means she was part Siamese.  She had the features of a Siamese, the eyes, and the fur, although the cream-colored fur changed to stripes by the time she was a year old. She was going to be named Sophie, but my friend Robbie said:  "She doesn't look like a Sophie.   How about Sienna"... so she baptized Sienna Rose.  Sienna Rose Koenig.  She joined Buddy Rich, Ella Louise, and Edison James Kittycat as a Koenig cat.   For a few weeks, I kept her in the guest bathroom with a screen so the other three cats could get to know her better. Surfing The best things come in boxes She had a great faith I found her lying on the couch with Buddy, Ella, and Edison.  She was "I am kitten, hear me roar."  She wanted to be with her siblings. Sienna was always kind and loving.  Never a cross word or a hiss from her.  She was a nurturer.  Ella liked to bully Buddy so Sienna would walk between them, giving a stare to Ella as if to say "Knock it off."  Ella died on February 28, 2012, followed by Buddy on August 8, 2012, and Edison on July 21, 2015.   Sienna loved all her siblings but she adored Edison. They were devoted to each other, always snuggled together, wrapped in each other's paws. Sienna and Buddy help to make the bed or was this a private joke between them A snuggle with Buddy It took less than a month for Sienna to fully accept Harper A Nats kitty Flat Cats for Caturday at Nats Park Sienna loved her little brother, Harper In 2019, she was diagnosed with hyperthyroidism and was given the same medication as humans but in a smaller dose.  She preferred the chicken pill pockets combined with Lobster-flavored Temptations (Dreamies) although being clever, Sienna would find the pill, and leave it on the carpet.  I reminded Sienna that Mommy always wins the pill war.   Put the pill in the pill pocket and try again.   I think Sienna just wanted another chicken treat. In February, I came home to find blood all over the comforter and wall in the guest bedroom.  Sienna had a tumor that burst.  The tumor had not been there in December when she had her annual checkup.  I took her to the emergency vet clinic as it was in the evening and my vet was closed.  I could not go in with her due to the pandemic. For three hours I sat in the car, waiting.   The vet called me to say her heart was fine,  but she has mammary cancer.   I made the decision to not put a nearly 16-year-old cat through surgery.  Everything else was fine including her weight.  The daily pill was keeping the hyperthyroidism under control,  She gave me antibiotics and pain killers.  Sienna's medical information was sent to her vet and I spoke to them later in the week.  I also brought her so her vet could see her.   She was eating and using puppy pads as she had stopped using the litter box in November 2020.  She was a fastidious cat, and she made sure she used the puppy pads, next to the litter box.   Until last week.  That is when I knew it was time.  She was eating less and stopped sitting in the bedroom doorway, looking ever so beautiful, where she would wait for her treats. She was able to jump on the bed last night and this morning, so we had our final cuddles. I told Sienna:  "I love you more.  I love you best." Sienna will have a private cremation. Her ashes will be scattered.  The service will be officiated by my pastor. Sienna is survived by her little brother, Harper Lee, 7.5 years old.  Sienna was a cat of great faith.  Saying her prayers The last photo, November 21, 2021
http://dlvr.it/SD3z4p
Posted by admin at 20:14