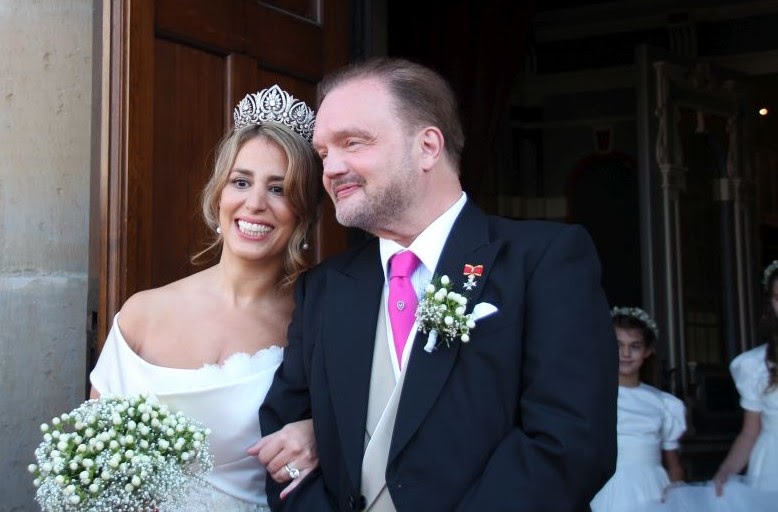 ICYMI: The Prince and Princess of Schaumburg-Lippe  @Netty Leistra The third time might be the charm for Alexander, the Prince of Schaumburg-Lippe. who wed Iranian-born Mahkameh Navibi on Saturday, October 9  at the Stadtkirche in Bückeburg. His first two marriages were dissolved by divorce.  Alexander 62 and Mahkameh, 40 have been in a couple since 2016.   She is a concert pianist and they share a love of music.   They were married in a civil ceremony at Bückeburg on September 12, 2020, but the religious wedding was put on hold until this year due to COVID-19.  @Netty Leistra Prince Alexander's first marriage was in 1993 when he married Princess Marie Louise "Lilly" of Sayn-Wittgenstein-Berleburg.  They divorced in 2002.  Five years later, he married Munich lawyer Nadja Anna Zsoeks.   This marriage ended in divorce in 2018.  He has one son, Hereditary Prince Heinrich Donatus, 27, by his first marriage and two daughters, Princesses Felipa, 12, and 10-year-old Princess Philomena. Princess Felipa and Princess Philomena carried their new stepmother's train. Alexander and his first wife,  Lilly,  remain close friends.  She had her second husband Lambros Milona, and their daughter Lana were guests at Alexander's second wedding.  Lilly also attended Alexander and Mahkameh's civil wedding, and today, she was the bride's maid of honor.  Lilly described Alexander's new wife as "an absolute person of the heart, that connects us." The guest list included members of German, Luxembourg, and Austrian royalty, including Prince Georg Friedrich of Prussia,  Prince Guillaume and Princess Sibilla of Luxembourg,  Archduke Karl of Austria, who was accompanied by Christian Reid,  Duchess Elisabeth in Bavaria and her husband, Daniel Terberger, the Hereditary Prince and Princess of Hanover, the Earl and Countess of St. Andrews, Count Charles and Countess Sarah von Faber-Castell, Prince Manual and Princess Anna of Bavaria, Prince Viktor and Princess Jungeun Anes of Isenburg,  The Prince and Princess of Löwenstein-Wertheim-Freudenberg, the Prince and Princess of Leiningen. After the wedding, the bride and groom and their guests returned to Schloss Bückeburg for a reception and a ball. All three of Prince Alexander's weddings took place in the Stadtkirche and all three of his brides wore a Schaumburg-Lippe family tiara, which was also worn by Alexander's mother, Baroness Benita von Tiele-Winckler at her wedding in 1953 to Philipp-Ernst Prince of Schaumburg-Lippe. Alexander, who was born on Christmas Day 1958, became heir to his father following the death of his older brother,  Georg-Wilhelm in 1983. They announced their engagement on January 8, 2020.   The Prince may have been a bit skeptical at first when he contemplated a third marriage.  But he told a reporter from the German magazine, Bunte:  “You only say yes a third time if you are extremely convinced and happy. And that’s me. We’ve been doing everything together since 2016 and we’re very much in love.    Embed from Getty Images Embed from Getty Images   @Netty Leistra My thanks to my dear friend Netty Leistra who allowed me to use three of her photos.  She is the copyright holder.  Unfortunately for royal bloggers such as myself,  the Getty images of this wedding do not include embedding, which means I cannot use them.
http://dlvr.it/S9LW8n
Posted by admin at 02:49