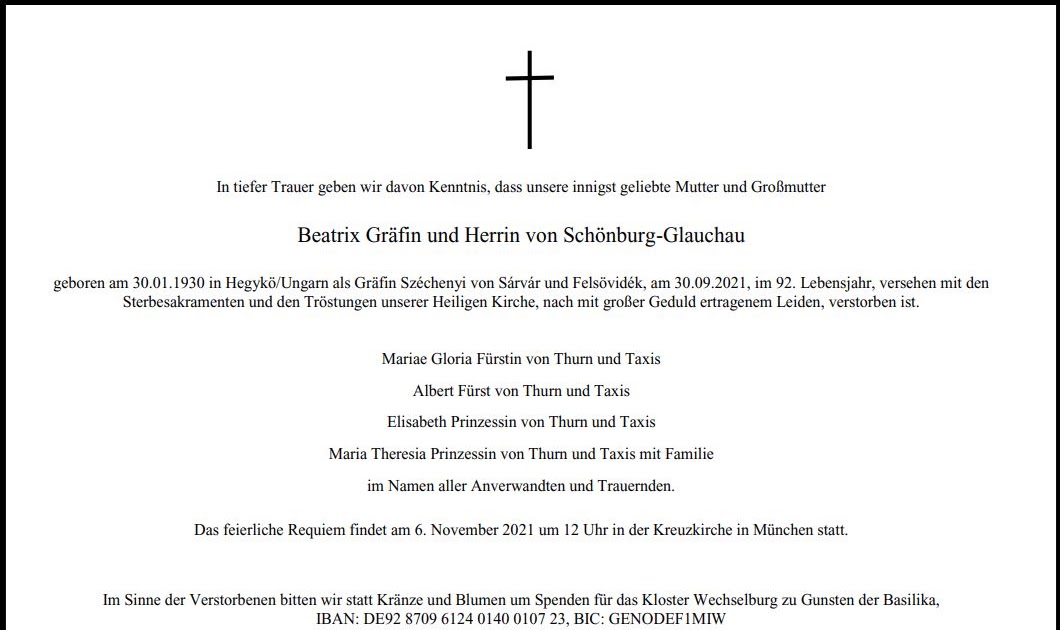 ICYMI:    One wonders if there is family discourse among the members of the Schonburg-Glauchau family.   It is a bit strange that Gloria Fürstin von Thurn und Taxis announced the death of her mother, Countess Beatrix of Schonburg-Glauchai who died on September 30 at the age of 92. Usually, it is the head of the house, the widower or the eldest son who places the death announcement in the local newspapers.    Embed from Getty Images Embed from Getty Images   The announcement should have come from Beatrix's second son, Alexander, the Count of Schonburg-Glauchau who is married to Princess Irina of Hesse.  He is the head of the family.  But it was Beatrix's daughter, Gloria who placed the announcement in the local Regenburg newspaper. Gloria left out a few people including her two brothers, Count Carl-Alban, who renounced his rights of succession in favor of his brother Alexander at the time of his marriage to Juliet Beechy-Fowler, and Alexander as well as Beatrix's grandchildren, Count Hubertus and Count Benedikt of Schonburg-Glauchau (sons of Carl-Alban), Countess Maria-Letitia, Hereditary Count Maximus and Count Valentin of Schonburg-Glauchau (Alexander's children) and Friedrich-Alexander, Maria-Pilar, Ernst-Moritz, and Maria Carlotta Beatrice Flick, the children of Countess Beatrix's elder daughter, Countess Maria Felicitas (Maya) von Schonburg-Glauchau who died in 2019.
http://dlvr.it/S8zrWJ
Posted by admin at 23:08