A Royal Romance: Twenty Years of Marriage for the Duke and Duchess of Calabria 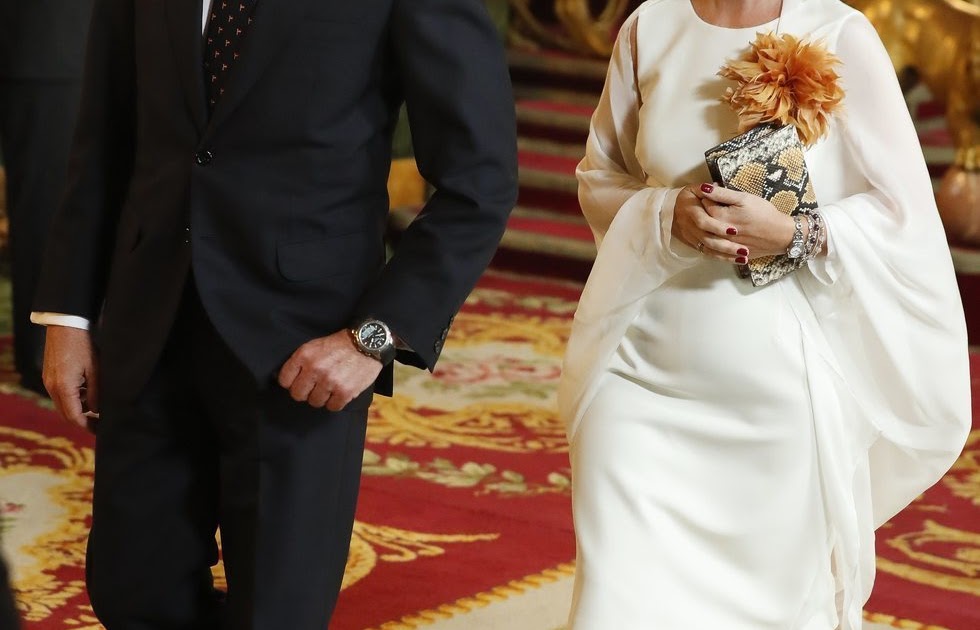 ICYMI: The Duke and Duchess of Calabria at the Royal Palace in Madrid, 2019. Photograph (c) Bekia. Today, Prince Pedro and Princess Sofía of Bourbon-Two Sicilies, Duke and Duchess of Calabria, celebrate their twentieth anniversary! Doña Sofía arrives at the wedding with her father Don José Manuel Landaluce. The Duke of Noto arrives at the wedding. On 30 March 2001, Prince Pedro, Duke of Noto, and Doña Sofía Landaluce y Melgarejo were married in the chapel at the Real Club Puerto de Hierro in Madrid. Father Marco Álvarez de Toledo y Marone, a grandson of Infanta Cristina of Spain, officiated at the religious ceremony. Don José Manuel Landaluce acted as the godfather for the couple; Princess Anne, Duchess of Calabria, acted as godmother. Among others, the wedding was attended by the Prince of Asturias (now King Felipe VI of Spain), Infanta Elena and her husband Don Jaime, and Infanta Margarita and her husband Dr Carlos Zurita. Pedro and Sofía. Born in 1968, Prince Pedro of Bourbon-Two Sicilies, Duke of Noto, was the only son of Infante Carlos of Spain, Prince of Bourbon-Two Sicilies, and his wife Princess Anne d'Orléans. Pedro's paternal grandparents were Infante Alfonso of Spain, Prince of Bourbon-Two Sicilies, and his wife Princess Alicia of Bourbon-Parma. Pedro's maternal grandparents were Prince Henri d'Orléans, Count of Paris, and his wife Princess Isabelle of Orléans-Bragança. Born in 1973, Doña Sofía Landaluce y Melgarejo was the daughter of Don José Manuel Landaluce y Dominguez and his wife Doña Blanca Melgarejo y Gonzales. Sofía's paternal grandparents were Don Francisco Landaluce y Asensio and Doña Manuela Dominguez. Sofía's maternal grandparents were Don Carlos Melgarejo y Tordesillas (a son of the 5th Duke de San Fernando de Quiroga) and Doña Emilia Gonzáles y Gonzáles de Jonte. The marriage of the Duke of Noto and Doña Sofía Landaluce y Melgarejo was the crowning of a loving relationship of almost ten years, which had began in 1991. Pedro and Sofía had known one another since they were teenagers. A strong bond formed between them formed: their romance commenced when Pedro was twenty-three and Sofía was eighteen. In 1993, the couple welcomed the arrival of their first child, a son: Jaime (now Duke of Noto). Pedro's father Infante Carlos, Duke of Calabria, hoped for a royal bride for his only son and heir; therefore, paternal and dynastic approval for the couple to marry was not immediately forthcoming.  Pedro and Sofía with their son Jaime. Despite the lack of approval, Pedro and Sofía maintained their relationship. Sofía focused on raising their son Jaime, and Pedro regularly spent time with his beloved and their child. Over the years, Sofía won over her eventual father-in-law Carlos. The dedication of Pedro and Sofía to one another and their child, as well as their desire to be married, was ultimately victorious. Infante Carlos, Duke of Calabria, served as one of the witnesses to the couple when they married in 2001. The Duke and Duchess of Calabria with their children, 2015. After their marriage, the Duke and Duchess of Noto had a further six children: Prince Juan (b.2003), Prince Pablo (b.2004), Prince Pedro (b.2007), Princess Sofia (b.2008), Princess Blanca (b.2011), and Princess Maria (b.2015). Although the children of the Notos were initially not considered to be dynasts, the Duke of Calabria decided after 2004 that the children of his son and daughter-in-law should, in fact (and rightfully so), be styled as Royal Highnesses and Prince(ss) of Bourbon-Two Sicilies.  The Duke and Duchess of Calabria arrive at the funeral of Infanta Alicia, 2017. Photograph (c) Getty Images/Europa Press Entertainment. In 2015, Pedro's father Infante Carlos passed away. Prince Pedro succeeded as the Head of the Royal House of Bourbon-Two Sicilies; he and his wife Sofía became titled as Duke and Duchess of Calabria. In 2020, the couple announced the engagement of their eldest son Prince Jaime, Duke of Noto, to Lady Charlotte Lindesay-Bethune. The wedding was originally scheduled for Summer 2021; however, due to the global coronavirus pandemic, the marriage has had to be delayed. The Duke and Duchess of Calabria. Our congratulations to Prince Pedro and Princess Sofía, Duke and Duchess of Calabria, on their 20th wedding anniversary!
http://dlvr.it/RwmfjC
Posted by admin at 01:13