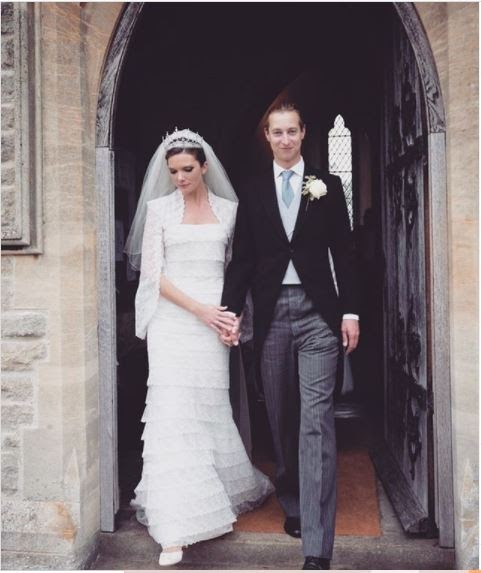 with permission of Antalya von Preussen  Alexander von Preussen and Hon. Antalya Nall-Cain were married on September 27 at St. John's Church, Lemsford.  A reception followed at Brocket Hall, the former ancestral home of the bride's family. Antalya is the only daughter of  Charles Ronald George Nall-Cain, 3rd Baron Brocket, and his former wife, Isabell Maria Lorenzo. the daughter of a German mother and Cuban father.  She was born in November 1987 in London and the birth registration lists her name as Natalya Stephanie Lauren Nall-Cain. In the 1990s, Lord Brocket served time for insurance fraud.  While he was in prison he sold the estate to the CCA (Club Corporation of Asia) for at least 60 years.  The Hong Kong-based firm has turned Brocket Hall, once the home of Lord Melbourne (Queen Victoria's Prime Minister) into a luxury hotel and conference center. https://brocket-hall.co.uk/ Alexander is the son of HRH Prince Andrew of Prussia and the late Czech-born Alexandra Blahova.   He was born on November 15, 1984, in London.   Prince Andrew is the second son of the late Prince Friedrich of Prussia (1911-1966), third son of Crown Prince Wilhelm of Prussia, eldest son of Kaiser Wilhelm II, and Duchess Cecilie of Mecklenburg-Schwerin.   Andrew's marriage was not considered equal by the then head of the house of Prussia, HI & RH Prince Louis Ferdinand.   Friedrich was a student at Cambridge when the second world war began in September 1939.   Eight months later, he was arrested and interned in a British camp before sent to an internment camp in Canada. Before the war ended, Friedrich returned to England to live.   In 1945, he married Lady Brigid Guinness, youngest daughter of Rupert, the 2nd Earl of Iveagh, a scion of the Guinness brewing family.   In 1947,  Friedrich applied for British nationality using the Sophia Naturalisation Act (1707) as he was a Protestant descendant of the electress of Hanover, who was Queen Anne's heir until her death in 1914, several months before the Queen died and was succeeded by Sophia's son, Georg. Lord Brocket succeeded his grandfather, Arthur, 2nd Baron Brocket in 1967.  The late Lord Brocket was a noted Nazi sympathizer.  He attended Hitler's 50th birthday party in 1939 and was an active member of the Anglo-German Fellowship.   Alexander's older sister, Tatiana, a noted architect, and her husband, writer Philip Womack, recently became the parents of twin daughters. https://royalmusingsblogspotcom.blogspot.com/2020/09/twins-for-tatiana-and-philip-womack-two.html  Alexander was the manager and lover of singer Mica Paris for more than four years. https://www.dailymail.co.uk/tvshowbiz/article-2276983/Mica-Paris-raves-toyboy-boyfriend--346th-line-British-throne.html?ito=feeds-newsxml#axzz2KbeH1lle http://royalmusingsblogspotcom.blogspot.com/2012/11/al-and-mica-still-going-strong.html https://www.standard.co.uk/news/lord-brocket-my-son-saved-his-sister-from-date-rape-drug-8208987.html https://www.dailymail.co.uk/home/you/article-489874/Why-Im-chip-old-Brockett.html
http://dlvr.it/Rhxzcc
Posted by admin at 03:55